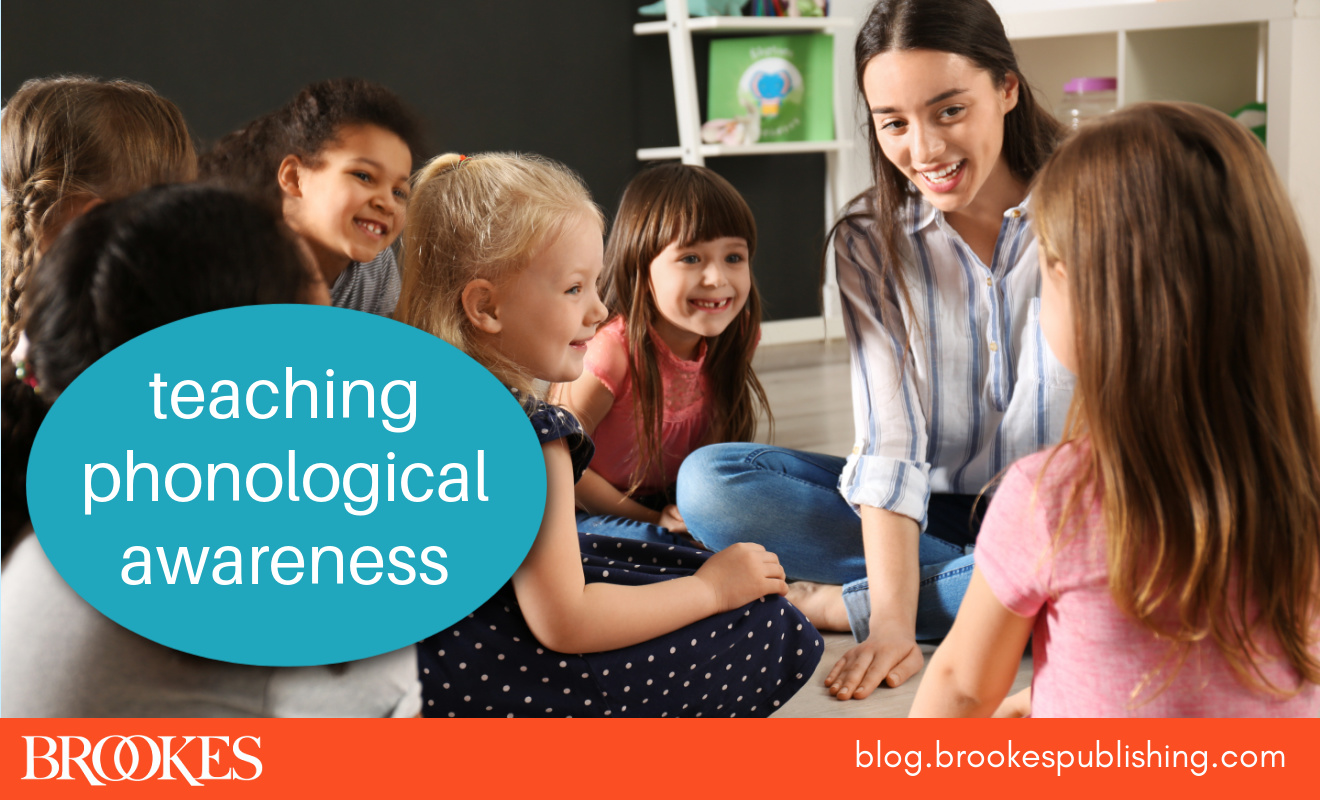 Phonological awareness—a child’s understanding of the sound structure of words—is a foundational skill that lays the groundwork for later reading success. In today’s post, we’re offering a collection of fun, low- or no-cost activities that will help you teach children the 4 components of phonological awareness: rhyming, syllable awareness, knowledge of words and sentences, and phonemic awareness.

Excerpted and adapted from two Brookes books (Next STEPS in Literacy Instruction by Susan M. Smartt & Deborah R. Glaser, and Phonemic Awareness in Young Children by Marilyn Adams), these engaging activities can be used by early childhood educators and communication professionals—and shared with parents so they can continue the learning at home. 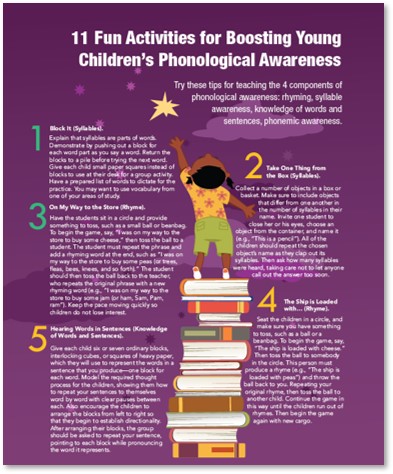 1. Block It (Syllables)
Explain that syllables are parts of words. Demonstrate by pushing out a block for each word part as you say a word. Return the blocks to a pile before trying the next word. Give each child small paper squares instead of blocks to use at their desk for a group activity. Have a prepared list of words to dictate for the practice. You may want to use vocabulary from one of your areas of study.

2. Take One Thing from the Box (Syllables)
Collect a number of objects in a box or basket. Make sure to include objects that differ from one another in the number of syllables in their name. Invite one student to close her or his eyes, choose an object from the container, and name it (e.g., “This is a pencil”). All of the children should repeat the chosen object’s name as they clap out its syllables. Then ask how many syllables were heard, taking care not to let anyone call out the answer too soon.

4. The Ship is Loaded with… (Rhyme)
Seat the children in a circle, and make sure you have something to toss, such as a ball or a beanbag. To begin the game, say, “The ship is loaded with cheese.” Then toss the ball to somebody in the circle. This person must produce a rhyme (e.g., “The ship is loaded with peas”) and throw the ball back to you. Repeating your original rhyme, then toss the ball to another child. Continue the game in this way until the children run out of rhymes. Then begin the game again with new cargo.

5. Hearing Words in Sentences (Knowledge of Words and Sentences)
Give each child six or seven ordinary blocks, interlocking cubes, or squares of heavy paper, which they will use to represent the words in a sentence that you produce—one block for each word. Model the required thought process for the children, showing them how to repeat your sentences to themselves word by word with clear pauses between each. Also encourage the children to arrange the blocks from left to right so that they begin to establish directionality. After arranging their blocks, the group should be asked to repeat your sentence, pointing to each block while pronouncing the word it represents.

7. Guess Who? (Phonemic Awareness)
With children seated in a circle, say “Guess whose name I’m going to say now.” Then secretly choose the name of one of the students and distinctly enunciate its initial phoneme only. For names beginning with a stop consonant, such as David, the phoneme should be repeated over and over, clearly and distinctly: “/d/ /d/ /d/ /d/ /d/.” Continuant consonants should be stretched and repeated (e.g., “/s-s-s-s/ /s-s-s-s/ /s-s-s-s/ /s-s-s-s/”). If more than one child’s name has the same initial sound, encourage children to guess all of the possibilities. This introduces the point that every phoneme shows up in lots of different words.

8. Basic Three-Sound Words (Phoneme Isolation & Identity)
Give yourself and each of the children three blocks. Start by saying a two-sound word (e.g., ice) in two clearly separate parts, “¯ı . . . s,” asking the children to repeat what you have said. All the children should then represent the word with two blocks of different colors to show that it consists of two sounds. Next explain that words may consist of more than two sounds. To demonstrate, say the word rice, “r . . . ¯ı . . . s,” and ask the children to repeat the word in unison. To represent the third phoneme, place a new block to the left of the two other blocks, pronouncing the whole word, phoneme by phoneme, as you point to each block in turn from left to right.

9. Silly Words (Phoneme Isolation & Identity)
Give the children a sound and have them replace the sound at the beginning of their names or any other desired words. The teacher may say, “The silly sound is /b/. Change the first sound in your name to /b/,” such that Mary becomes Barry and Sam becomes Bam.

10. Robot Talk (Phoneme Blending).
Say a word stretched out with every phoneme separated by about a second of time. The students then repeat the word back to you as a whole unit. For example, when the teacher says, “/b/…/l/…/a/…/ck/,” the students respond, “Black!”

11. Head-Waist-Toes (Phoneme Segmentation).
This is a great activity to help students identify internal sounds. Say a three-sound word, such as mitt. Students then stand and touch their heads while saying the first sound (/m/), waists while saying the second sound (/i/), and toes while saying the final sound (/t/). Then touch your waist again while saying, “What sound?” Continue to elicit the sounds in positions that students need help identifying.

Do you have a favorite phonological awareness activity for young children? Share yours in the comments below!

-Activities 2, 4, 5, 7, and 8 excerpted and adapted from Phonemic Awareness in Young Children by Marilyn Adams 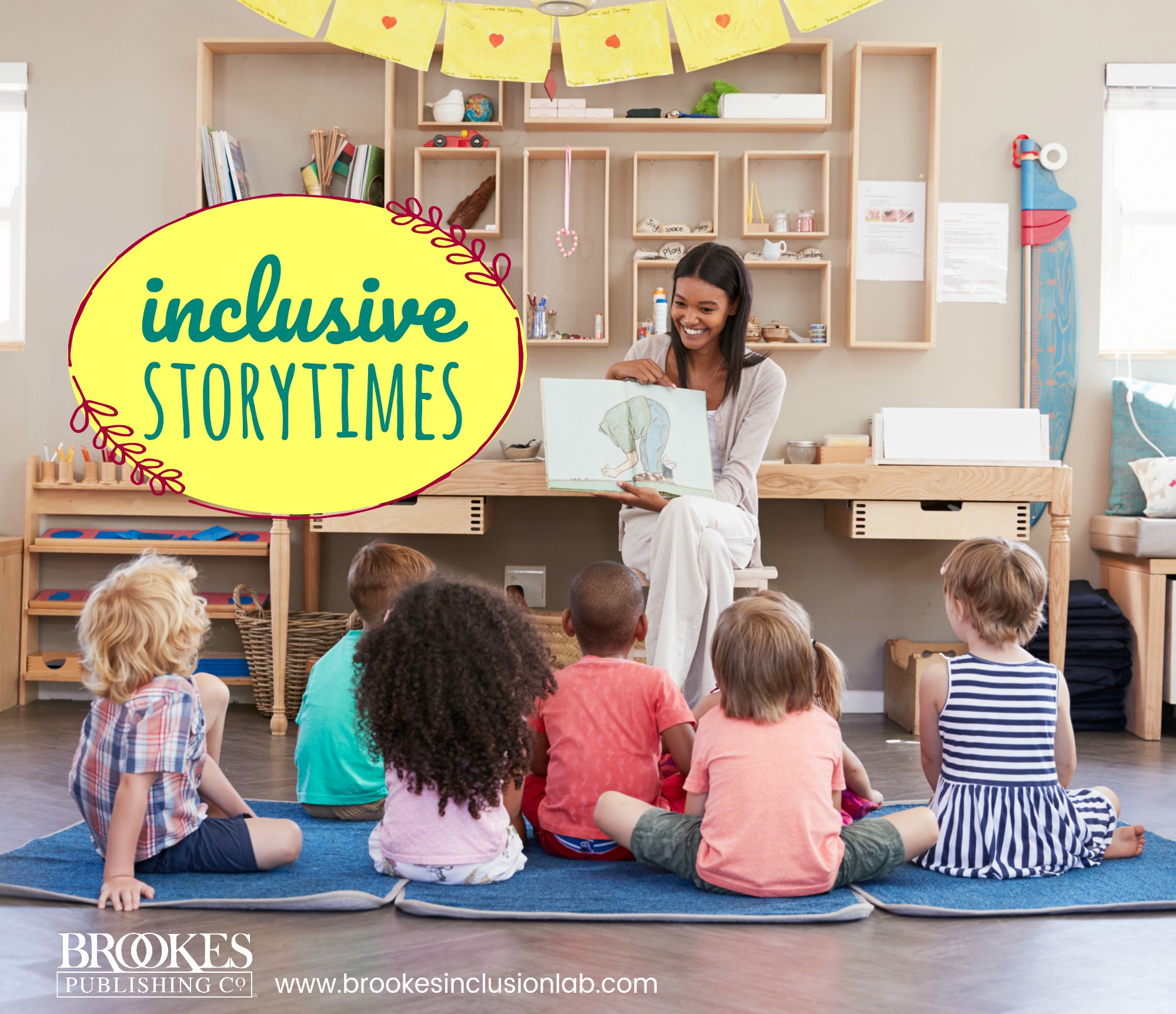 May 16, 2018
ANNOUNCEMENT: Before we get into this week's post, a quick special announcement. We've randomly chosen the winner of last week's final inclusion tote bag/mini-library giveaway. The lucky winner is: Beth… 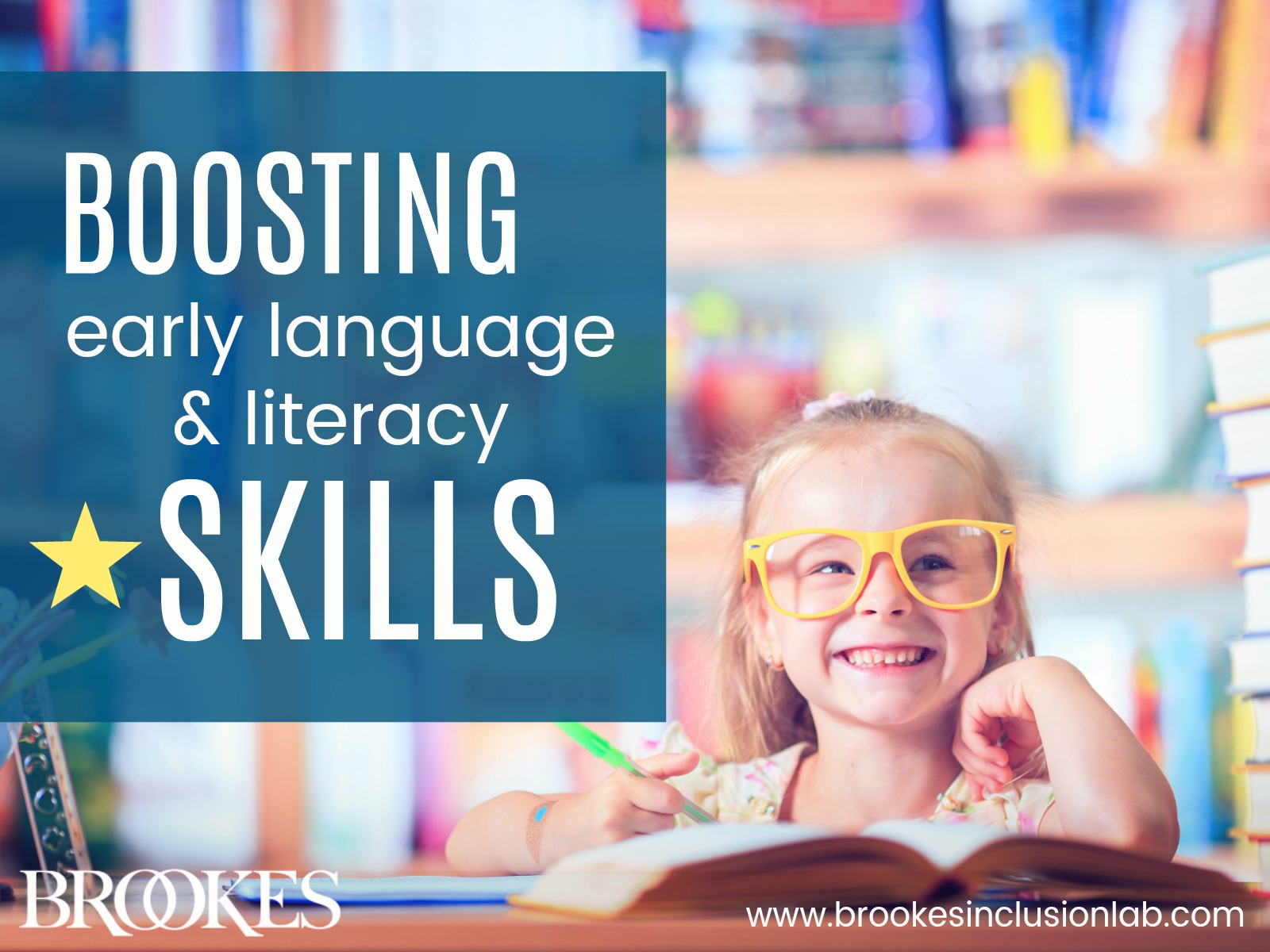 September 3, 2019
If you’re an early childhood educator, you know that the preschool and kindergarten years are an exciting time for language development. Kids are absorbing new words, hearing and telling stories,… 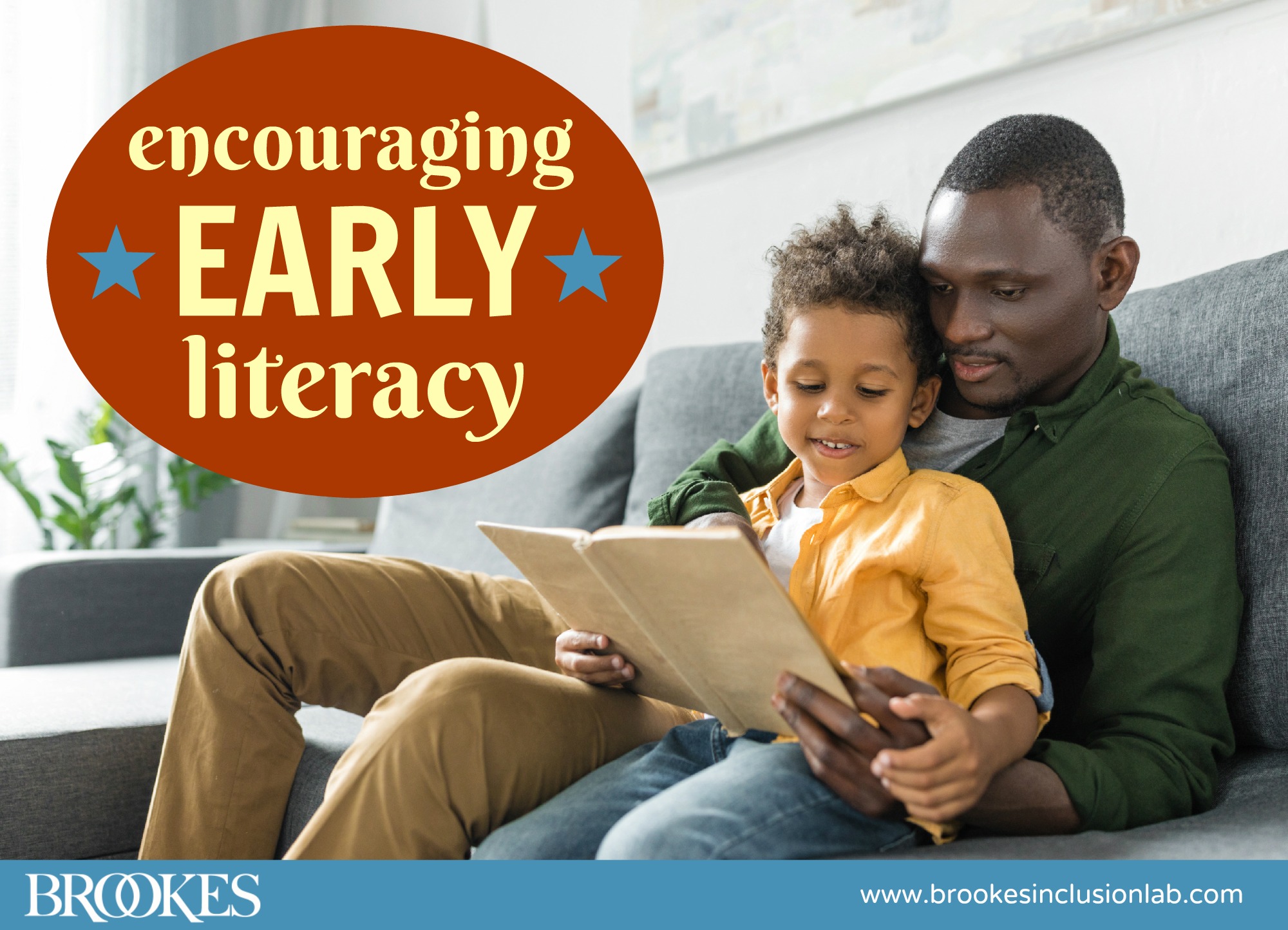 April 28, 2020
Whether you’re an early childhood teacher or a parent (or both), you play an important part in helping the children in your care become literate citizens. Even at a time…
Previous
Next