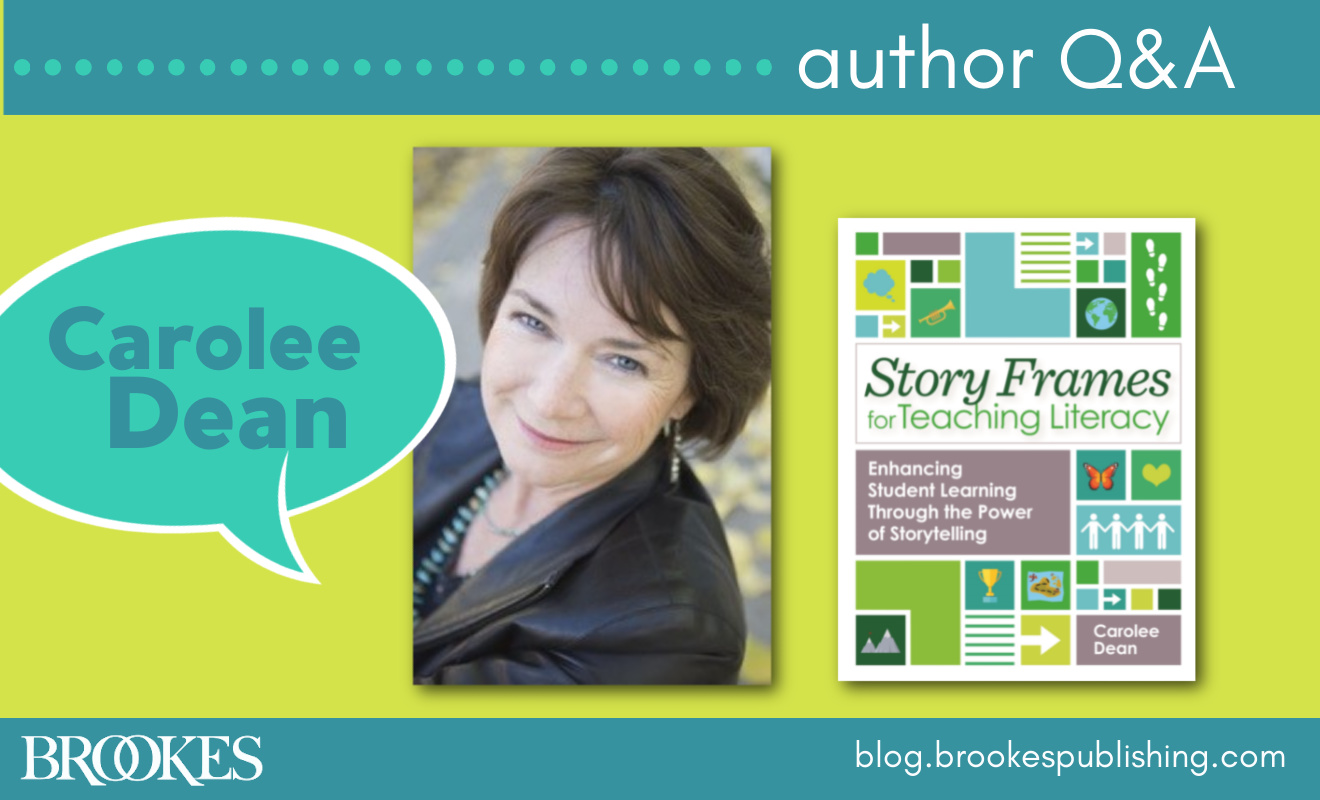 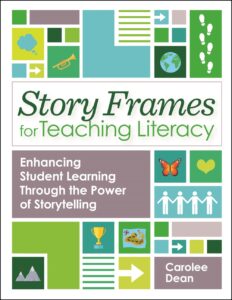 Storytelling is an art form that captivates children from an early age—so it’s no surprise that teaching them how to analyze story structure and create their own original narratives can help promote literacy and learning skills. In her new book, Story Frames for Teaching Literacy, author Carolee Dean offers in-depth guidance on how to use knowledge of 12 key story elements to build core literacy skills and help all learners develop a lifelong love of reading and writing. She joins us today to discuss her Story Frames approach, clarify how her book meshes with Structured Literacy, and more.

Your book explores the ways in which analyzing and creating stories can improve literacy and learning skills for all students. How does the process of mastering storytelling help boost those critical skills?

As a speech-language pathologist, anytime I evaluate a student’s receptive and expressive language I look at how they express themselves in connected discourse. Retelling a story is often part of that process. The ability to retell a story or create an original narrative are important skills for both school and life. Standardized tests have even been created to measure these abilities, and I discuss some of these tests in my book.

Understanding story structure gives kids a framework to organize a narrative that helps them determine which details to prioritize so they can recall those details, sequence information, make meaning out of new words and concepts, and learn to self-question to assess their own comprehension.

Stories are part of our daily lives. Families members tell stories to connect with each other, share their history, and to inform. Peers share stories to build relationships. Educators use stories to teach. Marketers use stories to persuade. Lawyers use stories to prove guilt or innocence. Detectives interview witnesses and use their stories to solve crimes. Stories help us to take the perspective of others, organize the events of our life, and make meaning from chaos.

I have found that struggling learners typically have two approaches to retelling a story. Either they have no frame of reference for the events, shrug their shoulders and say, “I don’t know,” or else they feel they must start at the beginning and include every single detail they can remember. Both responses stem from not understanding the basic structure of a narrative and what elements are essential to include in a retelling. When a student understands that structure, they then have a framework for organizing all kinds of narratives—those they encounter in school and those they encounter in everyday life. Consider how many core subjects use stories to convey information on topics as diverse as the Revolutionary War to space flight.

Can you give us a nutshell description of the Story Frames approach introduced in this book? Did you develop it in response to a specific unmet need you recognized in the field?

In Story Frames, students learn about the structure of stories and the key elements contained in almost all stories through the use of twelve story icons represented on a storyboard. The first row of icons on the storyboard represents the beginning of a story. The second row is the middle. The third row is the end. We talk about each story element and examples found in stories the child already knows. The next step is to share a model story with students while they draw stick figures to represent the events.

I developed this approach to analyzing stories because I realized that my students had a difficult time relating to the language we typically use to explain elements of a story. Speech-language pathologists like myself and many reading teachers talk about stories in terms of the story grammar elements outlined by Stein and Glenn. We typically use terms like setting, initiating event, internal response, plans, attempts, direct consequences, and reactions. Even fairly concrete terms like a story’s setting can be difficult for students with learning disabilities (even high school students) to grasp. If they have never ventured far from home and don’t have experience with a variety of places, the lack of contrast makes it challenging to fully grasp what is meant by a setting. That’s why I contrast the Ordinary World, which is described at the beginning of a story, with the New World found in the middle section. Sharing examples from stories they have read or movies they have seen helps students quickly see the contrast between the place where a character begins the story and the place where they travel during the course of a narrative.

English teachers tend to use Freytag’s Pyramid to discuss story structure with their students. They use terms like exposition, inciting incident, rising action, climax, falling action and resolution. Not only are these terms confusing to struggling learners, but terms like “rising action” don’t always fully describe what is going on in emotionally driven stories where there may not be much “action.” Rising tension is a better way to describe this part of the story.

By using more concrete terms that are accompanied by visual images (icons) and story examples, students learn a language they can use to understand stories, talk about them, and create narratives of their own. The beginning of the story starts out in the Ordinary World where the main character and setting are described. There is then a Call to Adventure and an internal Response to that call. Mentors, Guides, and Gifts is the term used to describe the special helpers that often appear at the beginning of a story and frequently provide a tangible gift that will help the main character on his journey. There is then a crossing over into a New World (the middle of the story), which may occur by way of a pumpkin coach, a magical wardrobe closet, or a train platform only accessed by young witches and wizards. These are just examples of some of the story elements described in Story Frames.

I also write fiction for teens, and many of my ideas were inspired by the Hero’s Journey and the plotting techniques of professional authors. For more about the Hero’s Journey, I suggest reading The Writer’s Journey: Mythic Structure for Writers, Third Edition by Christopher Vogler.

By using more concrete terms that are accompanied by visual images (icons) and story examples, students learn a language they can use to understand stories, talk about them, and create narratives of their own.

Many of today’s educators are focusing on structured literacy as a way to teach foundational skills. How does your book fit in with that kind of explicit, systematic approach?

Understanding text structure is an important part of structured literacy. The Brookes publication Multisensory Teaching of Basic Language Skills, Fourth Edition, edited by Judith Birsh and Suzanne Carreker, is a key text used by many structured literacy teachers. In their chapter on Strategies to improve Reading Comprehension in the Multisensory Classroom, contributing author Eileen S. Marzola talks about the importance of close reading, which includes understanding how various types of texts are structured as well as recognizing key elements such as plot, character, and setting.

In addition to teaching the macrostructure or overarching organization of narratives, Story Frames helps students develop skills at the microstructure level by providing strategies for understanding and using vocabulary, grammar, and complex sentence structures. These are all key components of structured literacy.

The Story Frames approach teaches students to recognize the basic building blocks of a story and then use that structure to understand the stories they read and plot the stories they write.

Can you talk a little about the package of online support materials you’ve created to accompany the book? What have you included, and how will the materials help teachers implement Story Frames in their own classrooms?

The robust list of online support materials is one of my favorite features of the book. The Brookes editors and I wanted to keep the book affordable and one of the ways we were able to achieve that was by providing several of the pages as online resources. I have analyzed the plots of 32 well-known children’s books using the Story Frames approach, and those plot analyses are available as downloadable resources. Other downloadable resources include the list below, and most have tips for online instruction, which have been vital to me as a teletherapist:

These resources will provide teachers with the tools and supports to get started right away using the story analyses. Many tools have been provided for developing key skills in the areas of vocabulary, reading comprehension, written language, and more.

You use many diverse fiction and nonfiction books as examples throughout Story Frames. What was your process for selecting these books?

When I choose a story for instruction, I build an entire unit of study around it and tend to spend a lot of time with each story. For this reason, I only pick stories I truly love, stories for which I can sustain enthusiasm across several sessions.

First, I look for a good story. Second, I try to find stories that link to the language arts, social studies, math, or science curriculum. (As an SLP, I’ve worked with students both inside and outside the general education classroom. When pulling a student out of class, I’m very sensitive to the fact that they are missing valuable instruction, and I want the story to support the core curriculum they may be missing in the classroom.) Third, I look for books that are examples of grit and determination. The latter tends to include stories about children who have persevered in spite of disabilities and/or people who have overcome prejudice of one type or another. When I find stories that do all three, those are the stories I choose. They are pure gold. Many of these tend to be nonfiction narrative picture books, and I highlight several in Story Frames.

For example, some of the picture books that I explore in Story Frames cover topics such how a German gingerbread baker became a spy and helped George Washington win the American Revolution, the invention of the Braille alphabet by a fifteen-year-old boy who was blind, and how an African American mathematician helped save Apollo 13. We all tend to recall these types of stories much more than lists of dates, names, and events.

What would you say are the three most important things educators will be able to do after engaging with your book?

First, educators will be pleasantly surprised by how significantly their own understanding of story structure increases. Then they will be able to enthusiastically share with their students how to think about stories the way authors think about stories. Finally, they will have exciting strategies for inspiring writing and storytelling with even their most reluctant learners.
Have fun!

Storytelling is an exciting journey.

If you liked today’s Q&A, check out Story Frames for Teaching Literacy 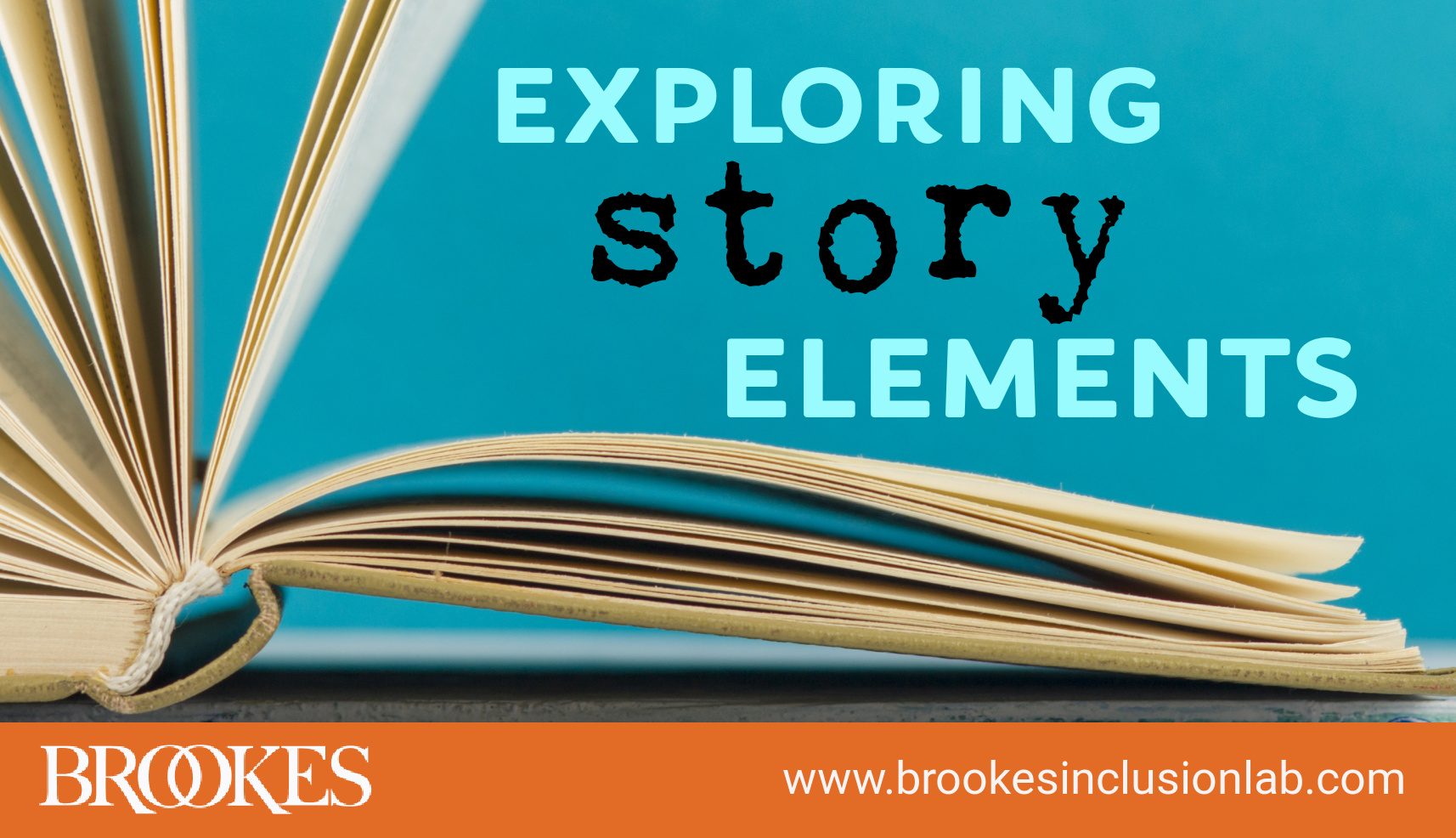 6 Ways to Explore Story Elements With Your Students

March 23, 2021
Storytelling is much more than an art form for budding young writers to master—it’s an invaluable teaching tool for your entire class. The process of learning to analyze and create… 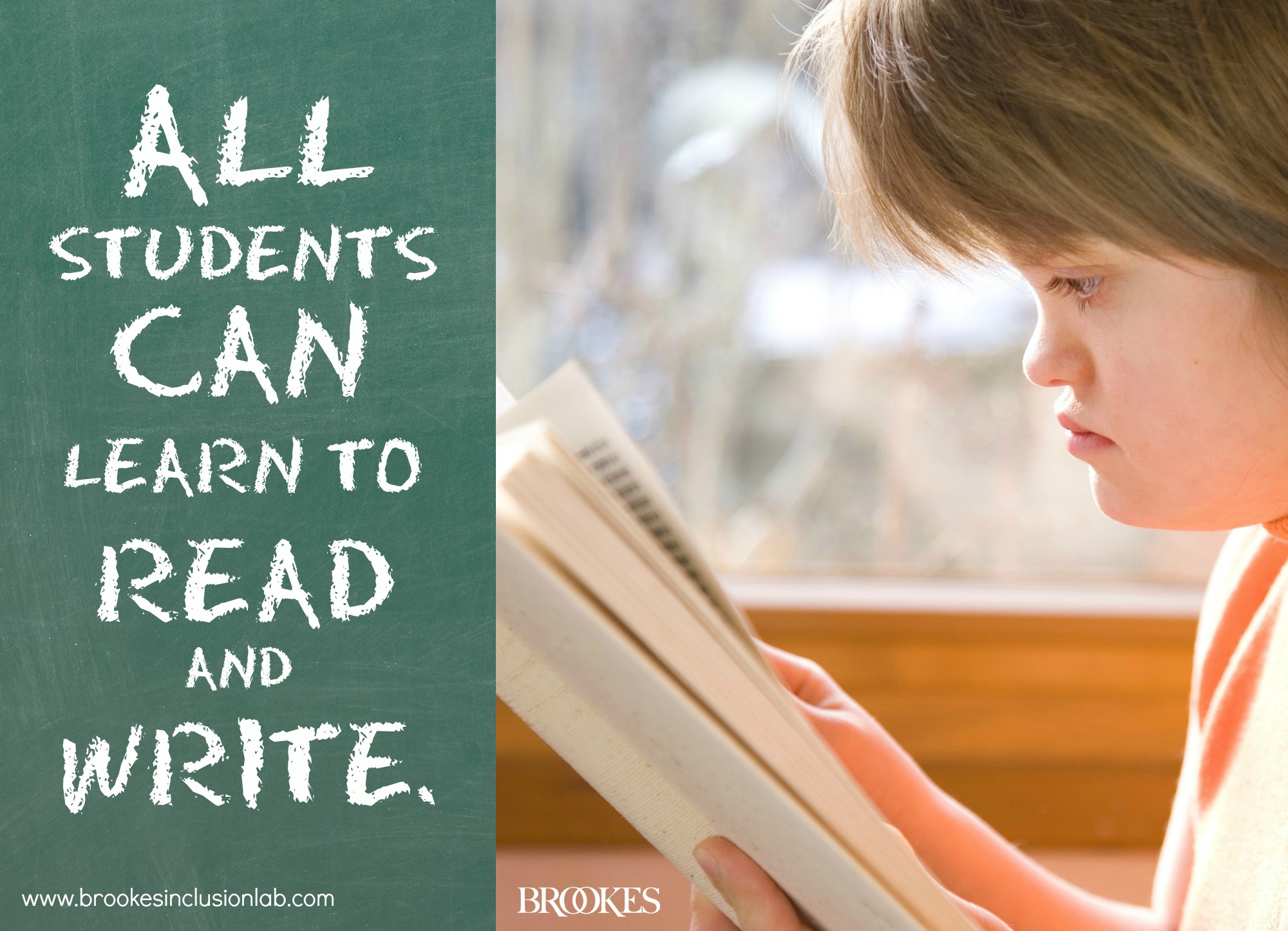 10 Musts for Teaching Literacy Skills to Students with Significant Disabilities

February 4, 2020
All students can learn to read and write. That’s the belief behind the new book Comprehensive Literacy for All, written by Karen Erickson & David Koppenhaver. Today we’ll be looking… 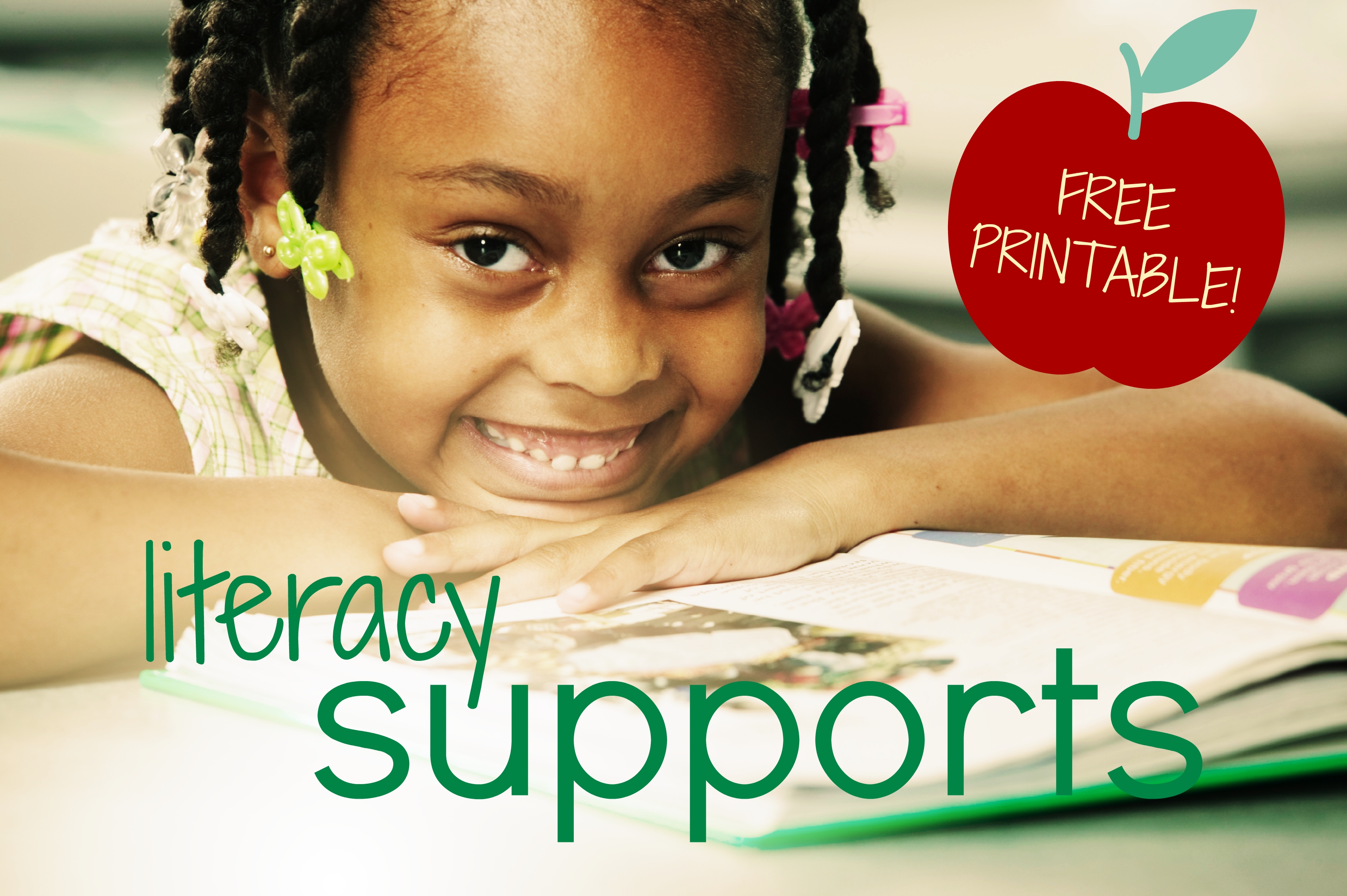 September 10, 2015
September is National Literacy Month, so what better time to try some fresh ideas for helping students with support needs strengthen their literacy skills? Today we're sharing some easy, ready-to-use…
Previous
Next